Showing posts from October, 2022
Show all

I think its over Bolsonaro bros

By anon1556 - October 31, 2022
Its been a day since the stolen election in Brazil. There was some hope that the real winner of the election Jair Bolsonaro would fight against the results and keep Lula out of office. Well now it looks like that isn't happening after all since he announced he wouldn't fight the results. BOLSONARO WILL NOT CHALLENGE RESULTS OF BRAZIL PRESIDENTIAL ELECTION - SPOKESPERSON — NewsWire (@NewsWire_US) October 31, 2022 Yeah I'm thinking its over. He isn't going to fight the stolen election no matter how obvious it was. Since whatever he could had done it would be in vain since the corrupt states where Lula won would just produce some fake audit and the government will just pass it off as real. The other option is that he could seize power and turn Brazil into Russia, but all of his "allies" in the Brazilian government are now backstabbing him. I mean this is Latin America shit like this is so common there that most of the people just accept that they just accept it
Post a Comment
Location: Brazil
Read more

Bolsonaro loses by a tiny margin

I already knew he only win by like 1 percent of the vote since both candidates are highly controversial among Brazilians'. And my assumption was correct when he lost to Criminal Lula by 1 point. https://en.wikipedia.org/wiki/2022_Brazilian_general_election Don't get me wrong I know that Lula would rig the results to narrowly win the election. I mean Brazil is a country where crime and corruption is rampant like with the rest of Latin America. What I don't like is that the stop the steal people are beginning to dogpile and are calling for the same failing tactics that didn't get us anywhere to stop the stolen election. Brazil is a corrupt country to begin with no amount of auditing or stop the steal rallies aren't gonna magically stop this. Since the corrupt officials will just rig the auditing results and nothing will happen to them. The only way for Bolsonaro to stop this is to seize power and install himself as a dictator.  There is a slim chance that he would do
Post a Comment
Location: Brazil
Read more 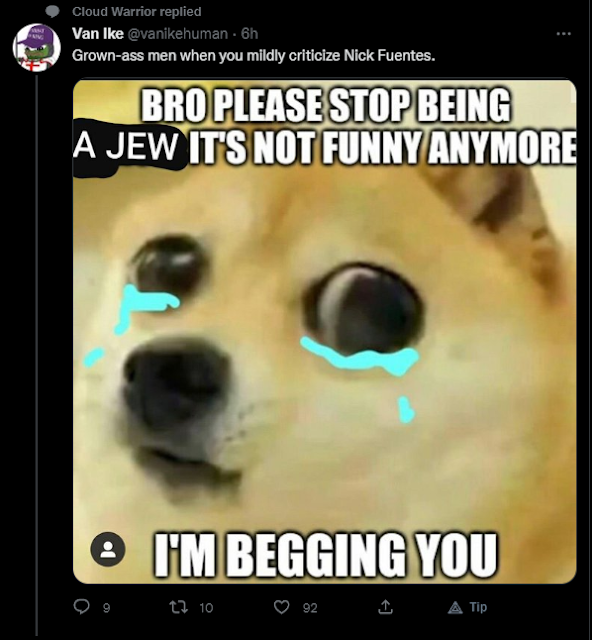 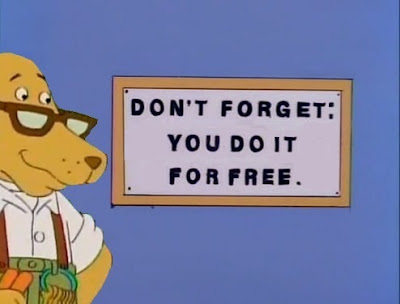 We thought the ban waves would but out of nowhere a giant banwave just occurred on Twitter. Somehow this is worse than the one on Thursday. Almost all the giant Groyper accounts got banned and hundreds of mutuals got wiped out in the span of hours. Some big ones like larvov, Spinachbrah, Jack, and Even Paul got banned in this Groypercaust. It's so fucking over pic.twitter.com/JQqrQ2eB6N — ✝️🇺🇸Floppa Enjoyer🇷🇺 (@_FloppaEnjoyer) October 30, 2022 Let forever remember this event in the years to come. The Groypercaust will live on as a reminder on how the jannies tried to destroy our right to post on Twitter, But we will prevail in the end.
Post a Comment
Location: United States
Read more

We all know all the free speech advocates are calling for the chief twit to unban all the safe populists never once calling to unban actual dissidents. Ben Shapiro is calling for musk to..... Unban Jordan Peterson?  — Ben Shapiro (@benshapiro) October 28, 2022 For one Jordan isn't banned from Twitter he just stopped posting since June of this year. He had one Tweet removed by the staff and just went dark ever since.  And 2nd he's not a target for any form of cancellation. No the times he is cancelled don't count since he still has access to social media. And his career and any project isn't going to be cancelled. Ben only pushes for Jordan since everyone else is a target to Ben, even people like Alex Jones or Ali are not in good terms with him and his posse of 2000s Democrats posing as Conservatives. And also because they have on by the either the ADL or other pro Jewish groups that control our congress and institutions. Ben is ngmi once Nick and all the people he help
Post a Comment
Read more

EU coping over the chief twit 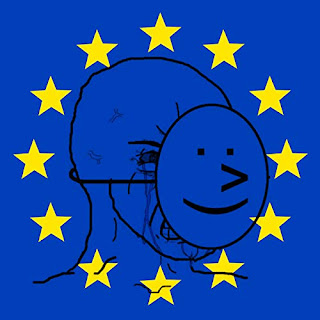 Europe is coping that the Woke Indians are thrown out of Twitter by the 2nd greatest African American of all time.  👋 @elonmusk In Europe, the bird will fly by our 🇪🇺 rules. #DSA https://t.co/95W3qzYsal — Thierry Breton (@ThierryBreton) October 28, 2022 They are worried since anti EU truth bombs are going to spread on the platform as well as the reality of how Europe is falling apart in supporting the globalist shithole of Ukraine. He's coping by posting a video with a 5 month old video saying Musk would apply with EU rules. Today @elonmusk and I wanted to share a quick message with you on platform regulation 🇪🇺 #DSA pic.twitter.com/nvP5FEXECY — Thierry Breton (@ThierryBreton) May 9, 2022 This doesn't matter since the EU can already fine or imprison you for posting mean tweets for years. And now that the censorship is gone foreigners can spread narratives to Europeans. And they can't extradite Americans who making mean tweets or supporting Russia on the Musk Twitt
Post a Comment
Location: Brussels, Belgium
Read more 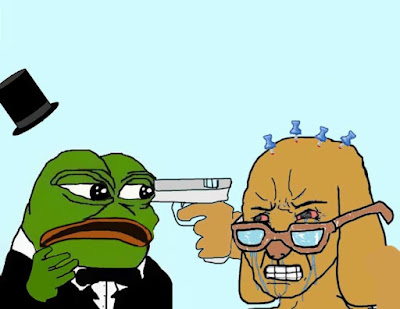 Twitter Jannies right now are in overdrive for their final banwave before being thrown onto the streets by Elon Musk. Hundreds of accounts either got banned or forced to verify text verified phone numbers which would render a ban evasion account permanently inaccessible. i just lost 200 twitter followers bc of the ban wave 😭😭 — blankey brandt (@basedbrandt) October 27, 2022   THIS IS SOMETHING LIKE THE HOLOCAUST MILLIONS OF OUR PEOPLE LOST 😭 — LA Nationalist 💀🕷 (@la_nationalist) October 27, 2022   Just lost over 150 followers — ✝️🇺🇸Floppa Enjoyer🇷🇺 (@_FloppaEnjoyer) October 27, 2022 BAP people and other fake dissidents didn't get affected by this while AF accounts got decimated in this final banwave.   Notice how the Twitter jannies didn't touch BAPs followers — gloyper (@miniongloyper) October 27, 2022 This genocide is in vain since we will return either with new accounts and appealed accounts that have been banned in years. While the jannies won't ever recover
Post a Comment
Read more 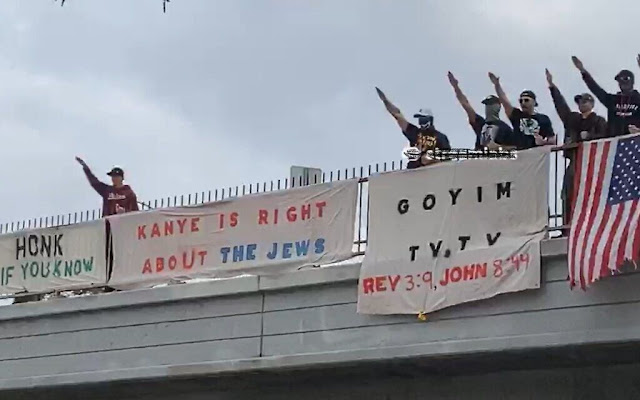 Glowniggers are already trying to subvert death con 3. In Los Angeles a place known for "White identity" a group of wignats put up signs on a bridge.  This image of the event alone has all the red flags. Also the wignats have said they do not support Ye in his mission even though right now he is the biggest promoter of JQ in a long time because he is black.  Cancellation failed to stop Kanye so now the next step is to try to do glowie stunts like this to try to blame FBI groomed shooters on Kanye being J-WOKE.
Post a Comment
Location: Los Angeles, CA, USA
Read more

By anon1556 - October 24, 2022
I'm already super blackpilled on the state of the UK a country where i originate from, but this just made me sure that it has reached the point of no return.  The "conservative" party that is elected by White brits elected a Indian to be the prime minister.  #UPDATE Sunak to be confirmed UK prime minister on Tuesday: Downing Street pic.twitter.com/vHK0tsW9zF — AFP News Agency (@AFP) October 24, 2022 This is the UK now White MP's are thrown into the bin in favor of non Whites to rule over a country that is majority White.  Nothing is going to change since Sunak is Boris in every way. He supports the current thing, Green agenda, Mass immigration, etc.  It was a fun ride for the UK now watch as this turns into Africa while all of Europe is embracing the new Nationalist fever that is sweeping the continent right now.
Post a Comment
Location: United Kingdom
Read more 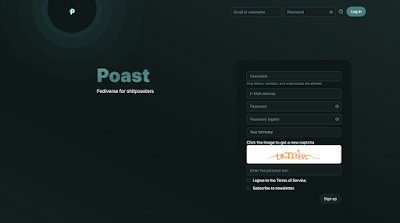 Poast was some hugbox space that was made for former Kiwifarms users and Ralph haters to have their own space free from their opposition.  Well now all of Ralphs haters have just left it for a new hugbox that is essentially the same website. Lmfao Metokur and all his sycophants have left Poast and moved to "chudbuds" 😂😂😂😂 — Ethan Ralph (@TheRalphRetort) October 24, 2022 Chudbuds is the just the same website as poast except with a different name. I mean their sign up screens are the exact same Its also made by the same person who launched poast.  I do not endorse raiding this site since he probably has the isp logger on chud buds like he had with poast. So if you join it to try to troll he's gonna have your isp on file. Also you're gonna get banned once they see you're making fun of Metokur, Jaden, etc. These guys are losers and are doing the net a favor by hiding behind these hugboxes so we don't have to see their L's on our feed.
Post a Comment
Read more

Boris has pulled out of the race 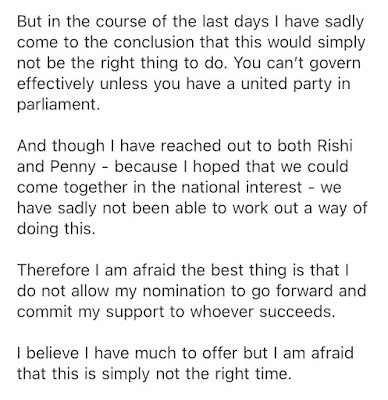 For the last few days there was a push by some of the tories to bring back Boris the cuck back to the role of prime minister. Well now those dreams are crushed since he has pulled out of the race for the leadership election. JUST IN - Boris Johnson has pulled out of the Tory contest — Rishi Sunak is likely to become Britain's next Prime Minister. — Disclose.tv (@disclosetv) October 23, 2022 So Britain would not be having a White prime minister after all. They are going to be ruled by an Indian and they are going to like it. Because saying that having minorities rule over a country where its 87% White will get you arrested for "hate speech". Boris has made a statement stating that he fears of muh division and basically is allowing Britain to become a minority controlled government for the sake of "unity" Britbong land at its finest. Those who still have the chance should just leave. Its only to get more dangerous for you to be there especially this winter when i
Post a Comment
Location: United Kingdom
Read more
More posts